For the past three weeks, on Tuesday and Thursday nights I've been participating in a Boot camp program the the gym Ken & I belong to put on. The instructor is an ex Marine dude. We're talking hard core! I knew I was gonna get my ass handed to me! I was right....After my first session I could not walk for two days. That's no joke folks!! But, I went back... 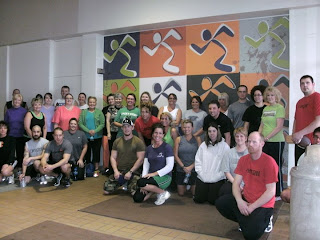 I must not be right in the head but the buttkickin I'd get felt fantastic! So, I kept going. The class only lasted an hour but in that hour we did numerous crunches of various types, pushups up the wazooo, more lunges than I care to even count and numerous other hard core fun exercises. I only missed two sessions. The first one I missed because my menieres had me all wonkified...meaning dizzy mess. The other night was because we were working hard on the Benefit stuff for our friend. 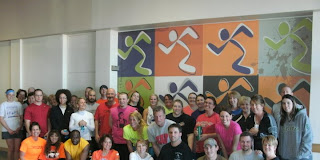 Last night was the last session and I knew my friend Danna wouldn't be there. I was very apprehensive about still going. I was terrified what would happen if I went into a mm episode of vertigo. Who would get me home? Who would go to the bathroom with me if that happened? I called Ken and ya know, I ALMOST didn't go last night....but he gave me the push I needed and told me to just go....so, I did! And it was fantastical! I found myself doing more and more each week. Now, I know I'll never be top notch but hey, I did it!! 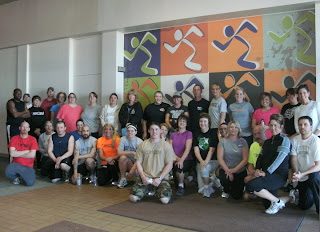 I won prizes three out of the four times I went. The first time I won a water bottle, the second, a protein drink, and last night I won a free one month membership! Oh, and next week we are totally getting free Boot camp t-shirts! Exciting stuff eh!! (That's the Yooper coming out in me btw) 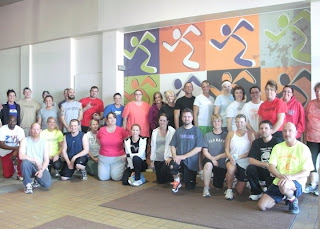 I feel sooo fortunate to be able to be doing the things I am doing. So jazzed up that I wrote my friend, who is also club manager, a lil note telling her just how amazing the gym has been. This is what I wrote:

"Jayne, I just have to tell you how amazing you all have been at the gym. Boot camp has been incredible!! I just feel like giving high fives and hugs to everybody! Just a few years ago I was unable to do so much due to my balance issues from menieres disease. Just riding my bike was difficult without getting extreme vertigo, I had to hold walls to walk, I couldn't cross country ski or run anymore without falling down. I was apprehensive about doing boot camp because of my wankerd up hearing but it has been beyond awesome!! The gym has given me back so much! I've met incredible people that always keep me wanting to do more, my balance has improved slightly and very soon I'll be sportan single digit jeans! A to the freaking men! I just want you and everybody to know how incredible Anytime Fitness is and I cannot thank the gym enough for giving me bits of my life back!! Never in my wildest dreams did I ever think I could get back to running and now we are doing the 5k in May. I know it's only a 5k but it's gonna be beyond spiffytastic!!"

I'm tellin ya...life changing stuff folks! Take that Menieres!!! It may eventually take away my ability to hear but it sure as hell isn't getting MY LIFE!! =) If you are somewhere in your life, that you don't think something isn't possible, know that it IS possible! Never give up on your dreams, goals or yourself!! You are worth it, believe you can do it.