The end is near

Before I show you the new floor I've sooo totally gotta show you the ceiling in the den/dining room all finished!! Shazam!! 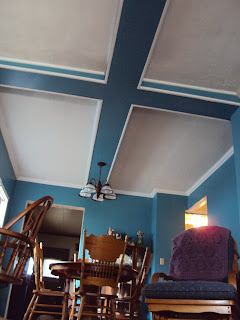 Look at the floor!! Ken and his dad layed the laminate last weekend. Ohhh, did I mention we only paid 77 cents per square foot for this yummy floor? Yup, totally awesome sale at Menards! It's not junky quality either. It had far better qualities that many of the more expensive ones. 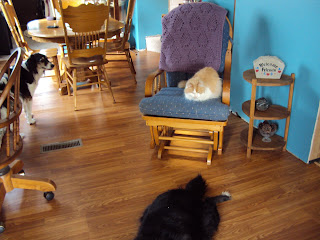 Ohhh, a couple more things. The underlayment plastic stuff was free after rebate!! So, in a couple weeks we'll be getting a check, which will then be used to buy the remainder of the items needed for the bathroom remodel. 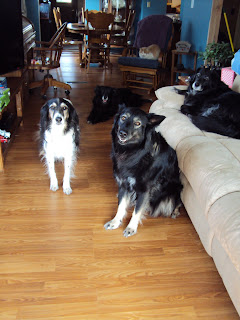 One more thing....Ken's parents had a rummage sale the end of July and we put a bunch of our non used, don't need anymore, this is cluttering up our house type things in the sale...anyways, guess what??? We were able to completely pay for this floor with the money we made!! BONUS right?!?! Get rid of stuff which we don't need and be rewarded with a beautimus new floor!! Bozinga!! 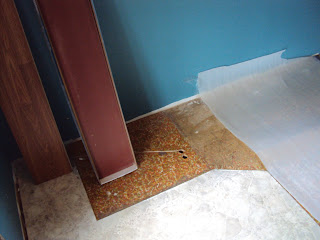 Putting up the Harvest 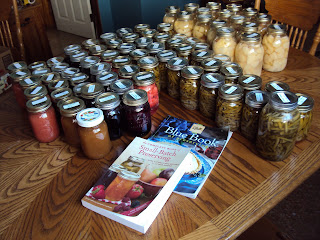 The gardens, the wilderness and our neighbors have blessed us with oodles of great fruits and vegetables that I have been canning. Two of my favorite books are the Ball Blue Book of Preserving and Small- Batch Preserving. Both are extremely amazing. 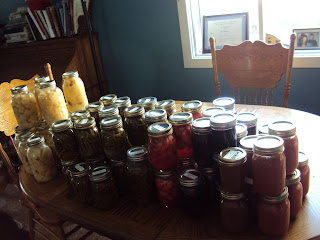 This is just a small portion of what we have "put up" so far this season. 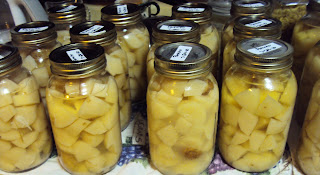 So far we have preserved:
5 - 1/2 pts blueberry jelly (blueberries were foraged in the woods)
2 pts blueberry jelly (blueberries from the woods)
8- 1/2 pts bluebarb jam (blueberries from the woods and rhubarb from my garden)
10 pts green beans (beans from the garden)
7- 1/2 pts sugar snap peas (peas from the garden)
5pts garlic green beans (beas from the garden)
12 pts dilly beans (beans and dill from the garden)
7- 1/2 pts apple maple jam (local maple syrup and free apples from our neighbors apple tree...they were given to us, we did not steal them lol)
5 pts red hot applesauce (free apples from our neighbors apple tree)
6pts red hot apple wedges (free apples from our neighbors apple tree)
8 qts baby red potatoes (from our garden)
9qts white potatoes (from our garden)
2 qts green beans (from our garden)
2qts sugar snap peas (from our garden)
6pts stewed tomatoes (tomatoes and green peppers from our garden)
3 pts zucchini relish (zukes and green peppers form the garden. Red peppers given to us from my cousin)
7- 1/2 pts blackberry jam (blackberries picked by my sister's house)
We have also picked raspberries which were made into a custard cake dessert, strawberries that were froze, peas were shelled and froze, onions dried for future use in coups, salads, etc. Before I began keeping track I made rhubarb sauce, rhubarb jam, strawberry rhubarb jam and a few rhubarb desserts. The rhubarb comes from the garden and the strawberries were picked at a local pick your own strawberry patch/farm. We also have blueberries in the freezer from our foraging adventures.
Other goods I will be preserving in my very near future is more applesauce in the fall when we go to the orchard, tomato sauce, pizza sauce, stewed tomatoes (we can never have too many jars of those), whole tomatoes, salsa, sweet pickle slices, hamburger dills, sweet pickles, tomato soup, hopefully pesto, roasted red pepper spread, summer squash, zucchini, peaches, cherries for pies, cherry jam, cream corn, whole kernel corn, broccoli, cauliflower, carrots, and more beans and peas. August and September are busy months here for harvesting and home preserving. Our gardens are just beginning to give us an abundance of what we need on a daily basis. In the coming weeks I will have my hair in a pony tail, forget the eye make-up (because it would just melt off my face), towel on my shoulder and my green rooster apron around my neck. It's a great time of the year!! (Just don't judge me if you see me out in public and I have forgotten to take my apron off...hehe)

Every morning I am greeted by several sunflowers in the raised bed at home. It seems they grow 6 inches every night. Before long they will be as tall as the garage roof line. 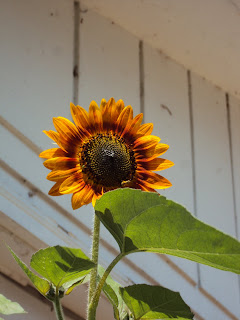 Even the cherry tomato plant is reaching for the clouds. I had to trim some of the leaves from the zucchini because the vines were taking over more than half of my driveway and they were much taller than myself. 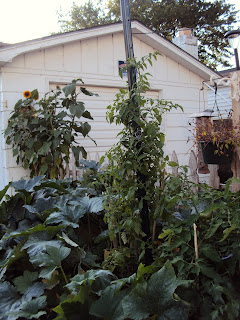 The potatoes in our tater tower are almost ready to harvest. 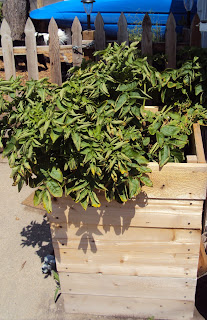 I came home from harvesting at our community garden plots and was looking around by the summer squash plants. I saw that there were oodles of large yellow flowers so I went to take a picture & holy bean bags!!! I found this almost 2lb squash hiding. 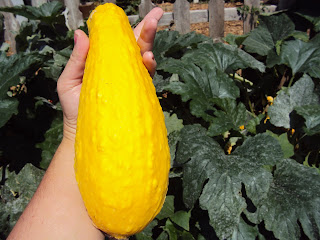 part of the larger raised bed. I'm soo glad we put these gardens in this year. 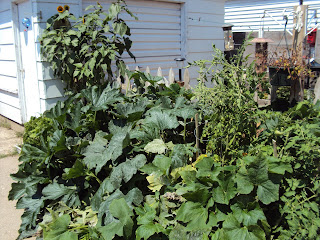 Nasturtiums keep garden pests away and the flowers and leaves are edible. We have yet to try them however. I'm really hoping to get another crop of lettuce and spinach. The onions and other lettuce have been harvested. Gosh, I sure do miss fresh spinach though. 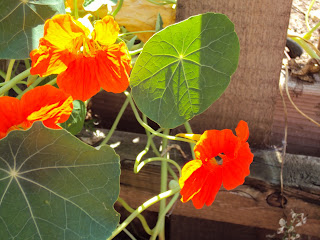 We have 4 Eastern Black Swallow Tail caterpillars hanging out on the dill and cilantro in the back herb/strawberry raised bed. I look forward to being a witness to their transformation. 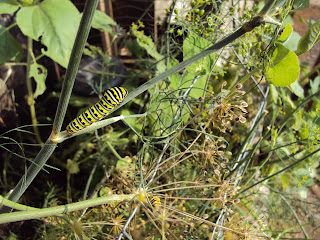 A daddy-long-leg finds some shade on the leaves of a sunflower. 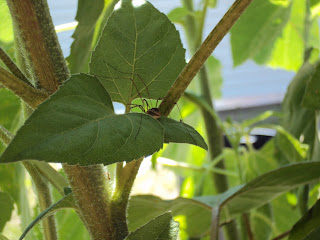 We're starting to harvest carrots at home too. =) 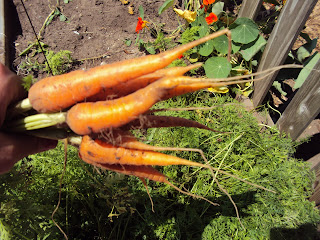 We are still getting a couple zucchini per day and we've just begun getting rip tomatoes from the cherry tomato and yellow tomato plant. The birds have been munchin on the sunflower seeds and I'm happy to report that the planting of spinach, lettuce and beans I planted are all poking through the soil.
Posted by Kathy at 10:28 AM 1 comment: 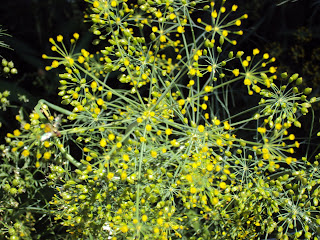 July gave us plenty of veggies and fruit. I know it's nowhere near other peoples gardens but hey, it's a start and we've been able to "put up" a pretty decent amount of home canned goods.

Green Onions- these were harvested before I got my handy dandy kitchen scale. But we had at least 100. This was the 1st year growing onions and guess what?? I JUST learned that onion sets DO NOT produce large onions like I guess I assumed. Either way, we have enjoyed these onions in salads, soups, and other dishes. I dehydrated some as well to use in the future.

Asparagus- I planted asparagus this year so no harvest until next year. We did get a few adorable lil asparagus shoots but had to let them grow so they come up thicker next year.

Strawberries- again, no scale when these were harvested. Despite the insane amount of rain we got we were able to harvest a couple handful of berries. Chloe (our tortoise) got a few of those berries and I'm pretty sure her shelly self was pretty darn happy. I also went to one of our local berry patches and picked two flats of berries.

Spinach- several gallons which made for some pretty yummalicious pestos, salads and again, Chloe enjoyed quite a few leaves.

Cilantro- It's growing like a weed. Just as soon as our 70 some odd tomato plants ripen up we'll be snipping that cilantro to make salsa. I'd really like to incorporate it with some dishes as well. Time to experiment with new recipes/concoctions.

Dill- We have mammoth amounts growing. I've used several handfuls when making the dilly beans. Once our cukes are harvested we'll be snipping dill to make pickles and relishes.

Yellow Squash- 1# 7oz August has just begun and we will be up to our eyeballs in this very soon.

Zucchini- 1# 9oz We are harvesting at least one of these per day now. I for see August to be one heckuva busy month already.

THEN.....I was very blessed when my neighbor friend came over one afternoon while I was sitting on the porch. He told me I could have as many apples from his Iridescent Apple Tree as I wanted. I figured we'd pick a basket full. Just enough to make some applesauce and maybe some jelly. Well....27 1/2 lbs later....I was able to make apple maple jam, applesauce, red hot apple wedges and red hot applesauce and I still had a basket left over!!

Ken and I went on a car rd adventure one day that took us to a popular raspberry bush area. The bugs were horrendous but we managed to pick a total of 4 cups worth of berries and a handful of thimbleberries. I tried a new recipe to use the raspberries and holy delish!! I'll have to post that one for sure!!

We are also extremely blessed to have forests all around us that are oozing with blueberries. It wasn't even the height of the season when we went and we picked 2-3 gallons. I hear the berries are at peak right now. I just may have to hop in the truck and go foraging!!! I'm extremely excited to see what August brings. July has blessed us with over 100lbs of homegrown, some free delicious fruits and veggies.
One of the most delightful things about a garden is the anticipation it provides. ~W.E. Johns, The Passing Show
Posted by Kathy at 11:01 AM 1 comment: